Oil heating and the environment

Decarbonisation of oil for domestic heating :

Almost all UK domestic oil fired central heating systems use 28 sec oil which is sometimes known as kerosene.  In Jan 2008 fuel sulphur in all off-road fuels (including Kerosene – home heating oil) was reduced by half in order to significantly reduce the amount of pollutants released into the atmosphere through fuel combustion.

The consequences of lower sulphur levels in boiler fuel :

Sulphur naturally occurs in crude oil and the process used to remove the sulphur is very expensive for refineries to implement.  At least one UK refinery no longer makes kerosene, as it is uneconomic for it to do so. This lack of UK production has created a higher percentage of kerosene being imported (around 44%) and a much more variable fuel quality.

To safeguard good, clean, efficient combustion of your oil boiler, regular servicing will ensure that any problems associated with varying fuel quality are addressed.

With increasing focus on renewable and sustainable energy requirements, Bio fuel usage is set to increase. Work is already in progress to establish bio-fuels, produced wholly from vegetable oils as a partial or complete replacement for kerosene.  Initially, it is intended that liquid bio-fuel and kerosene will be blended in a fixed ratio to bring down further the CO2 emissions.  These first generation bio-fuels already exist in the market however at the moment, they are not widely available in the UK, but could provide a greener alternative to normal heating oil, especially if it uses waste vegetable oils as its feedstock.

In areas not connected to mains gas it is estimated that 1.2 million households use oil central heating, other fuel options include electric powered boilers, coal fired systems and liquid petroleum gas (LPG). All have their own benefits and drawbacks. Some of the key benefits of oil are 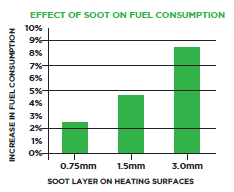 Modern oil-fired boilers are very energy-efficient and manufacturers claim net seasonal operating efficiencies of up to 97% for ‘A` rated condensing oil boilers.  Condensing boilers provide optimum performance with lower running costs and reduced CO₂  emissions.  In order to comply with the current UK Building Regulations it has been mandatory Since April 2007 to install condensing oil boilers (except range cookers) and should always be considered as a first choice in any application.

There are three types of oil boiler: combination, regular and system. The type of system you need will largely depend on the size of your home and your requirements.

Combination Boilers also known as the “combi” boiler, act as both

central heating boiler and a high efficiency water heater within one small compact package. Eliminating the need for hot water cylinders and water tanks, they are  excellent systems to have installed in smaller properties where space saving is important. It produces hot water on demand at mains pressure making it more efficient with the same levels of performance as a power shower. The combi boiler is one of the most popular types of boiler to be installed accounting for 2 out of every 3 boilers installed annually. 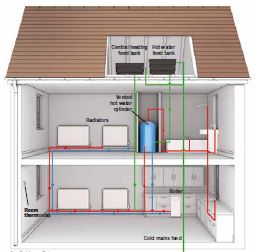 Regular Boilers also known as conventional boilers require a hot water cylinder to function, best suited to homes that require a large amount of stored hot water or homes with more than one bathroom. They are also compatible with solar hot water heating. They are usually open vented systems and require a cold water storage cistern to feed the hot water cylinder and an expansion cistern.

Caring about our environment – Why we need to ‘green’ our oils

High carbon heating fuels were the first targets during government discussions around how to decarbonise heating and hot water. Coal and oil were named as two such fuels; there are two choices. You either take oil-fired appliances out of sale or you ‘green’ the oil.

An extensive field trial in 2008-9 showed that biofuels worked quite well in an oil-fired boiler. They used up to a 50% blend of FAME oil (fatty acid methyl esters) – essentially it was waste cooking oils such as chip shop type oils, and some virgin oils.

What next for Bio-fuels

Any current solution to decarbonising heating and water needs to be a green version. This means it must come from a waste source which is, technically possible and will perhaps roll out in two or three stages. A blend of bio and kerosene oil first of all, perhaps by the mid 2020s. And, eventually a 100% bio oil probably by the mid to late 2030s.

Kerosene oil happens to be the same product that’s used in the aviation industry and there is a desire to decarbonise that as well. Some of the players in the aviation fuel industry are looking at new technology and trying to get their bio oil not from crops or virgin oils but from industrial gas – waste sugars, used car tyres etc. The good news is that there are very positive indications that bio oil can be converted from landfill-type waste and used again to heat people’s homes.

“The fuel of the future is going to come from apples, weeds, sawdust – almost anything. There is fuel in every bit of vegetable matter…” – Henry Ford, 1925